Parkinson’s Disease: What You Need to Know 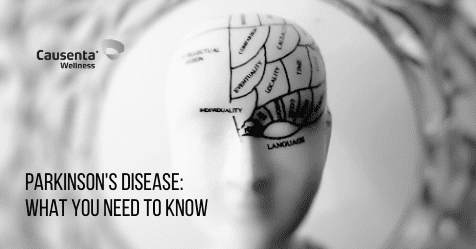 Parkinson’s disease, named for the English doctor James Parkinson, who first detailed the disease in An Essay on the Shaking Palsy in 1817, is a nervous system disorder. Parkinson’s disease progresses over time and is characterized by tremors, muscle stiffness and slowing of movement in the extremities and other parts of the body, including the face. Speech can also be affected, causing it to become slurred or softer in volume. There is no cure for Parkinson’s disease, but treatments are available that can improve quality of life.

What are the common symptoms of Parkinson’s disease?

As with many nervous system and neurological disorders, Parkinson’s disease symptoms vary from patient to patient and may be so slight in the early stages of the disease’s development that they go unnoticed. This is yet another reason why Dr. Tom Incledon, Founder & CEO of Causenta, urges patients to be aware of their health and changes they notice. “If you have regular annual check-ups with your doctor and track your health, you are more likely to discover an illness or disease earlier, which can drastically impact your long-term prognosis,” says Incledon.

There are also several complications associated with Parkinson’s disease that are not directly related to the breakdown in brain function, but which cause adverse effects to quality of life for those with the disease. These additional Parkinson’s disease symptoms include:

Are there risk factors of Parkinson’s disease I should know about?

How is Parkinson’s disease treated?

Because dopamine cannot be directly administered to the brain, these medications are usually taken orally or through an injection and convert to dopamine inside the body. While they do a good job controlling tremors and helping with walking and movement, they do have side effects such as nausea, swelling of the ankles, light-headedness, hallucinations, and drowsiness.

Incledon also notes that wellness practices such as a healthy diet full of colorful fruits and vegetables and regular exercise, in this case aerobic type, can be helpful in managing Parkinson’s disease symptoms. “Physical therapy can build strength and improve balance and working with a speech-language pathologist may also limit adverse effects on your speech as well,” he says.

In certain cases, doctors may recommend surgery as a Parkinson’s disease treatment option. With this procedure, a surgeon will place electrodes in the brain. These are connected to a generator in your chest that sends electrical pulses to your brain, alleviating Parkinson’s disease symptoms. This is known as deep brain stimulation or DBS. It can be effective for patients who do not respond well to medications, but is invasive and does not prevent Parkinson’s disease from progressing.

Are there regenerative medicine treatments for Parkinson’s disease?

While research is on-going in the area of regenerative medicine, there is evidence that certain treatments could be helpful in treating Parkinson’s disease and maybe even in repairing cells affected by the disease. This potential could help slow or eliminate disease progression.

Exosomes and stem cells  are two regenerative medicine materials that may show promise in treating Parkinson’s. Exosomes provide a means of intercellular communication with instructions for repairing damage to cells. Stem cells have the ability to regrow, repair, or replace damaged or diseased cells, organs, or tissues. Because of their unique qualities, they show great promise in treating neurological disorders and other hard to treat disease, such as Parkinson’s disease.

If you are interested in learning more about Parkinson’s disease symptoms and how to manage them with regenerative medicine, contact our expert team for a consultation for an individualized plan.

Get The Ultimate Diet Guide to Fight Cancer

Fill out your information below to download our E-Book "The Ultimate Diet Guide to Fight Cancer".
×