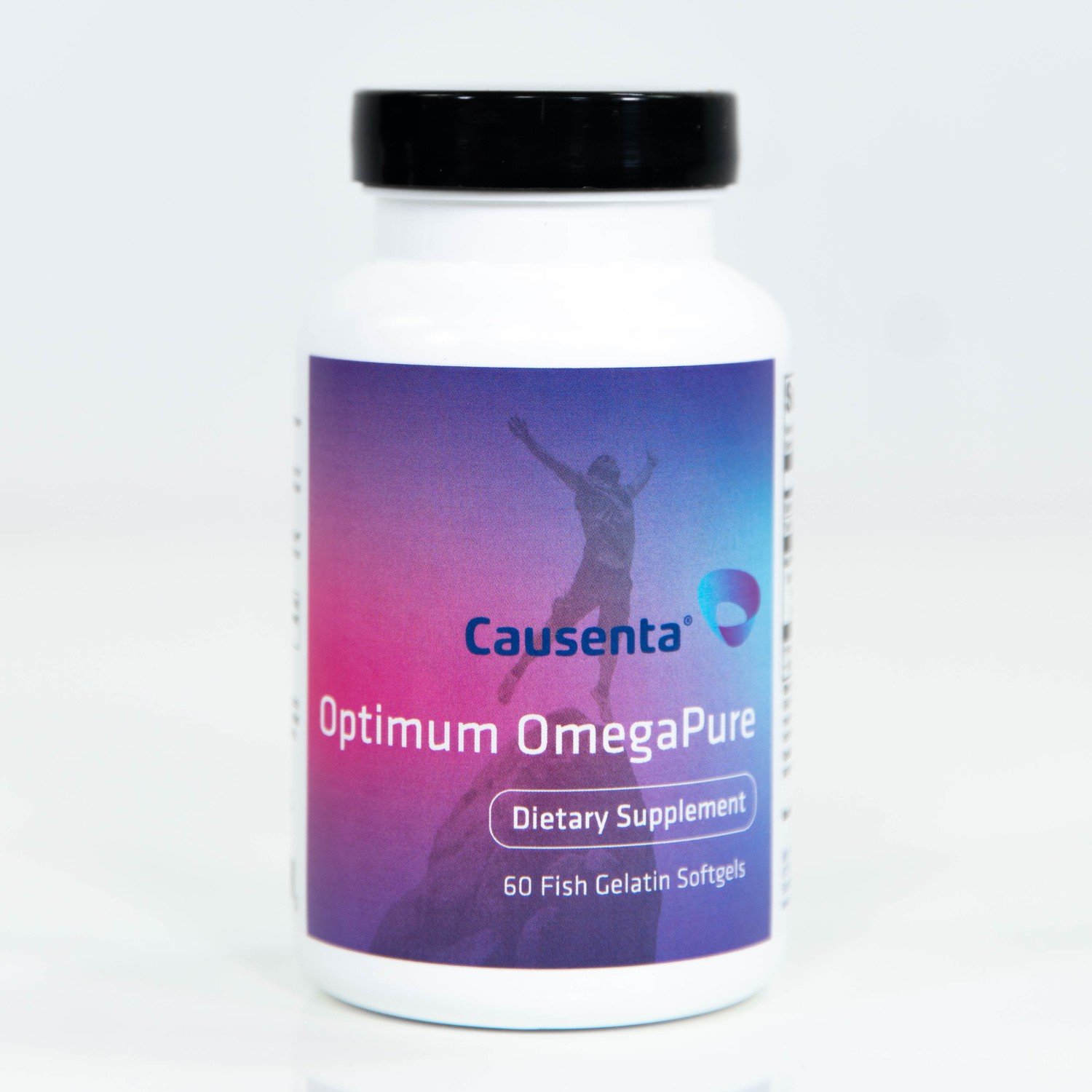 The MaxSimil PLATform is a novel monoglyceride delivery system that enhances absorption of lipid-based and lipid-soluble nutraceutical and food ingredients. This technology has been applied to Causenta®’s OmegaPure/Optimum OmegaPure formulas in order to create a unique vehicle by which to deliver EPA and DHA. Due to the fact that monoglyceride oils are intrinsically emulsifiers and are, by nature, in a readily absorbable form, they can bypass the body’s normal fat digestion process. These qualities make OmegaPure/Optimum OmegaPure an excellent method for delivering omega-3 fatty acids, especially to individuals with digestive, pancreatic, or gall bladder challenges. Studies show that MaxSimil fish oils (FO) have three times (300%) greater absorption of EPA and DHA compared to other leading fish oils.*[1-3]

OmegaPure/Optimum OmegaPure formulas are made using proprietary MaxSimil compositions containing monoglyceride FO with no additional ingredients, carriers, or excipients. Each fish-gelatin softgel is entericcoated, and every batch of fish oil ensure the world’s highest standards for purity, potency, and freshness. The fish oil is non-GMO, certified sustainable from Scandinavia, and antibiotic-free. Additionally, it is ecofriendly because the greater absorption of EPA and DHA ultimately means that fewer grams of fish oil need to be harvested for the same benefit.*

In Vitro and In Vivo Animal Studies

The ability of MaxSimil-enhanced EPA and DHA to positively influence growth inhibition and apoptosis in colorectal, breast, lung, and prostate diseased cell lines was first demonstrated in a series of in vitro studies. [4-6] Researchers subsequently set out to demonstrate efficacy in animal models after oral administration. In three separate animal models, MaxSimil EPA and DHA forms showed superior activity on diseased cell-line growth inhibition and cytokine production when compared to control, corn oil, krill oil, or the parent forms ethyl ester (EE) EPA and ethyl ester (EE) DHA.[4,7,8] These in vivo animal studies proved that orally supplemented MaxSimil EPA and DHA were well-absorbed and bioactive. Researchers postulated that the observed superior effects of MaxSimil EPA and DHA forms were the result of enhanced absorption, and they set out to prove this hypothesis.*

The in vivo pharmacokinetic studies in rodents involved a comparison between MaxSimil DHA FO and its parent EE DHA FO and an analysis of blood concentrations of DHA over time. The doses used were equivalent to human doses of 3 g/day and 30 g/day; the latter was included primarily to investigate toxicity at high doses. Researchers found that MaxSimil DHA FO had a three times (3x) higher peak concentration, a 3x higher saturation potential at the high dose, and a 3x higher absorption rate (at a 3 g/day equivalent human dose) than its parent DHA FO. No toxicity was observed at either dose level.[1,2] This research demonstrated superior bioavailability and presumably better exposure of cells to DHA.*

A phase 1, double-blind, randomized, crossover, pharmacokinetic study was performed in 20 healthy adults aged between 19 and 71 years who were administered 6 g (containing 1800 mg EPA and 1200 mg DHA) per day of EE FO or MaxSimil FO.[3] Parameters studied were plasma EPA and DHA concentration (as percent of total fatty acids), Cmax, and AUC. Compared to EE EPA+DHA, the results indicated that at peak concentration, MaxSimil EPA and DHA forms were 3x higher, they reached maximum concentration faster, and maintained their plasma levels longer. The finding in the animal study was validated: the MaxSimil FO instantaneous absorption was 3x greater than the EE form.

In vitro and animal studies have demonstrated the positive effects of MaxSimil FO on airway immune response (e.g., IgE, leukocytes); the expression of COX-2, NF-kB, cytokines (e.g., IL-6, IL-8), MUC5AC, and mucin; and Ca(2+) hypersensitivity in lung tissues.[8-11] In other research, rats subjected to eight weeks of a high-fat, highcarbohydrate diet were either not supplemented or provided 3 g/day of MaxSimil DHA. Compared to the data from the non-supplemented group, the data from the MaxSimil DHA supplemented group clearly showed a positive impact on cardiovascular health parameters. Measures included blood pressure, heart rate, serum lipid levels, cytokine production, aortic wall thickness, and a DHA:AA ratio in aortic tissue, which correlated with the production of resolvin D2 and D3 metabolites.*[12]

A Note About Resolvins and Other EPA and DHA Metabolites

Specialized proresolving lipid mediators, such as resolvins, protectins, and maresins, are EPA and DHA metabolites naturally produced in vivo through enzymatic conversion of EPA and DHA. These mediators aid the body’s “clean-up” response to the arachidonic acid cascade.[13] Rather than supplying a single molecule or metabolite, which would mirror the pharmaceutical model, OmegaPure/Optimum OmegaPure fish oils provide all the benefits of EPA and DHA as well as the expected and desirable benefits of their metabolites.*